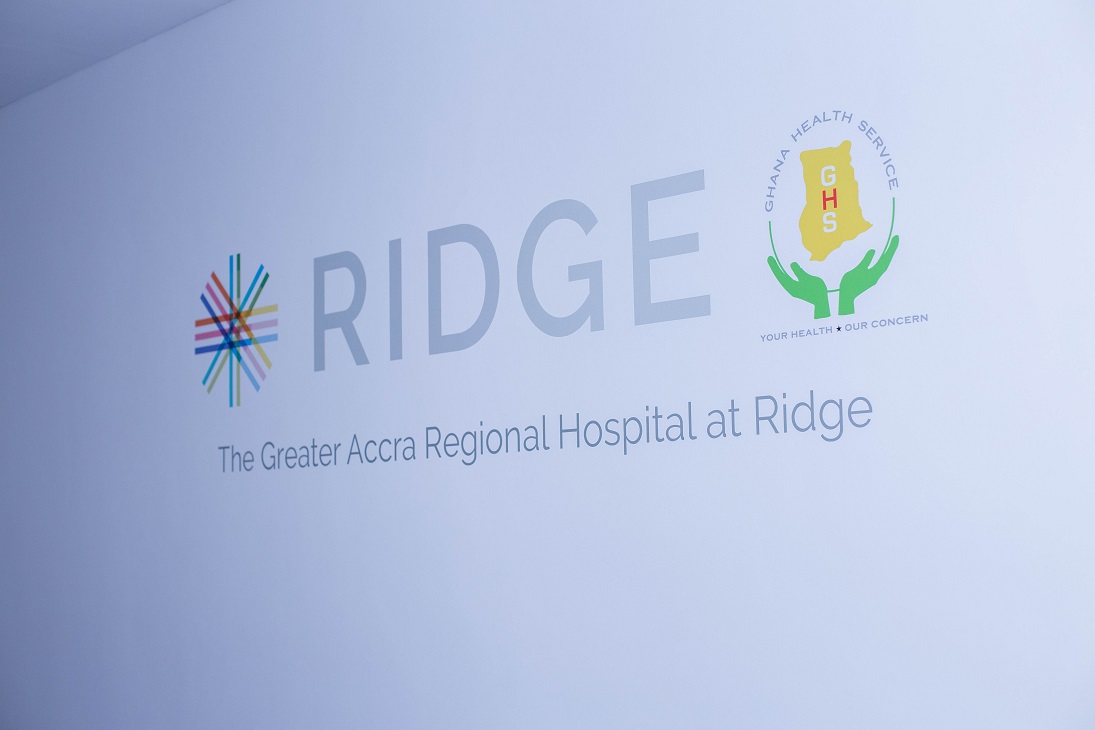 The Internal Audit Unit is independent of the Administration and performs independent auditing functions. The Unit is directly responsible to the Hospital House Management Committee and indirectly to the Medical Director. 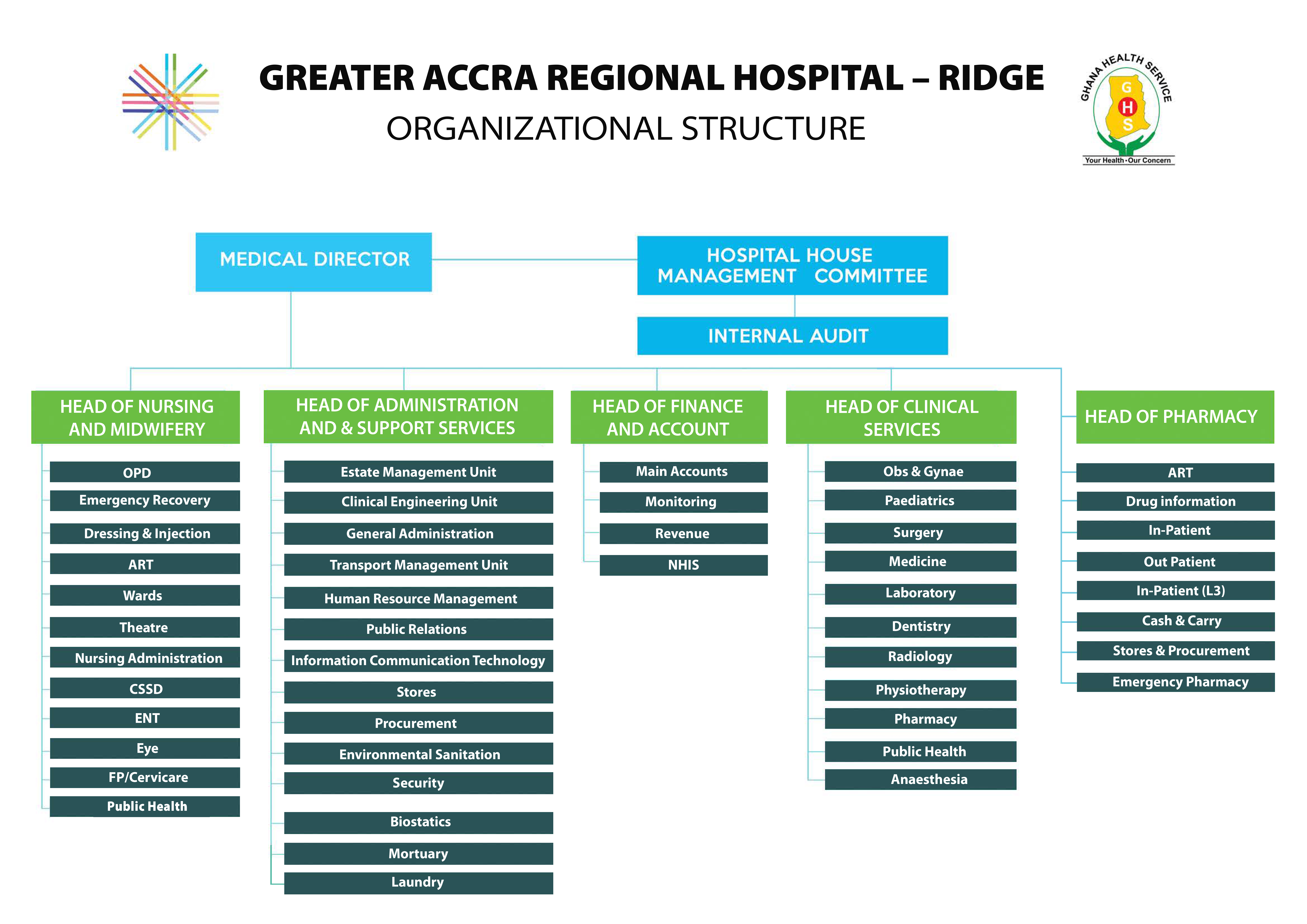 Committees are groups of persons formed internationally and to whom specific tasks have been assigned (Willan, 1990). Committees are one of the several governing tools used by management to share authority across an organization to stimulate interest in decision-making. Participative management utilizes committees or working groups with clearly defined terms of reference as a tool to achieve the overall organizational goals. With committees, members function collectively and responsibility for decisions is spread among several persons. Committees thus offer the opportunity for group problem solving and serve as a forum for presenting multiple points of view. This helps to safeguard against the tendency of power and authority being centralized among few persons.

Committees are an integral part of the operations of the public-sector health institutions in Ghana. At GARH, there is a statutory Hospital House Management Committee (HHMC) which assists the Medical Director to formulate policies towards the management of the Hospital. The HHMC is the highest Decision-Making Body and supports the Medical Director to implement government policies (i.e. GHS Council, MOH / GHS/RHD Policies) and also formulate and implement internal local policies and operational strategies in the hospital.

The membership of the HHMC comprises:

The Medical Director is the Chairman of the HHMC while the Head of Administration and Support Services acts as its Secretary. The HHMC is required to meet once every month or at least six times in a year to conduct its normal business. In case of any special event, the committee is required to convene an emergency meeting to resolve that particular issue. The quorum at a meeting of the Hospital Management Committee is the majority of the total membership.

Apart from the HHMC, there is also a Core Hospital Management Committee made up of the Medical Director and the Heads of the five main Division or functional areas of the Hospital, i.e.
This Committee meets once in a week (every Monday) to take stock of the activities of the Divisions in the preceding week, develop strategies to address the challenges that emanate therefrom and chart the way forward for the current week. In addition to the HHMC, a number of Sub-Committees have been set up to handle relevant issues referred to them by the Hospital Management. The recommendations of all Sub-Committees are advisory. The management reserves the right to implement recommendations of a Committee as it is or vary it. Depending on the nature of an issue, Management can decide to handle it directly without referring to the relevant committee. The membership and the terms of reference of the various Sub-Committees set up in the Hospital are spelled out as indicated below:

Operational Linkages of the GARH

Within the framework of MOH/GHS, the GRAH reports administratively to through Regional Health Directorate to Office of Director General (GHS headquarters) to GHS Council and to MOH. Functionally, the GARH is an integral part of the Greater Accra Regional Health System. The Hospital reports to the Regional Coordinating Council (RCC) through the RHD. The Hospital also reports to Metro Health Directorate in terms of service statistics. The GARH also serves as a referral center for Municipal and District Hospital within GAR and also provides technical supervision over the lower facilities in the region. The operational linkages in terms of administrative and functional linkages of GARH are presented diagrammatically in the Figures below: 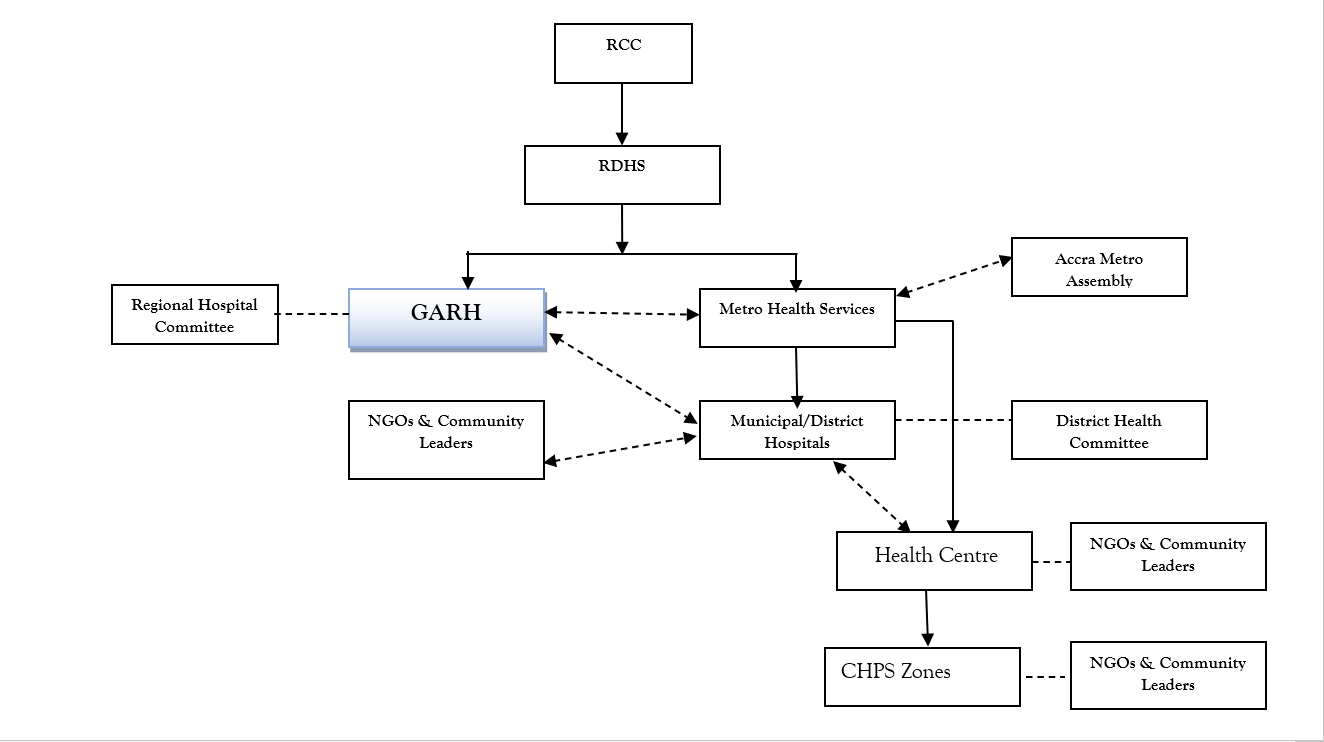 Have any Health concerns? We would like to hear about it!